Dead ever after (Sookie Stackhouse #13) by Charlaine Harris 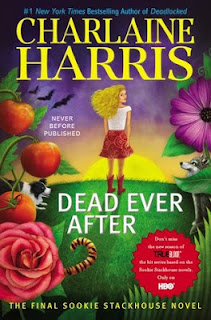 
Sookie Stackhouse finds it easy to turn down the request of former barmaid Arlene when she wants her job back at Merlotte’s. After all, Arlene tried to have Sookie killed. But her relationship with Eric Northman is not so clearcut. He and his vampires are keeping their distance… and a cold silence. And when Sookie learns the reason why, she is devastated.

Then a shocking murder rocks Bon Temps, and Sookie is arrested for the crime.

But the evidence against Sookie is weak, and she makes bail. Investigating the killing, she’ll learn that what passes for truth in Bon Temps is only a convenient lie. What passes for justice is more spilled blood. And what passes for love is never enough…

I debated for a long time wether to give the final book in this series 3 or 4 stars. While unlike most people I wasnt dissapointed how it ended some things were still confusing and it would be better if they were explained more. It is hard to say goodbye to a series you worshiped for years and to characters who became very important to you. Sookie, Sam, Eric, Pam, Bill, Alcide, Quinn, Jason, Tara and all the other characters will always stay with me. A lot happens in this book and if you want to avoid spoilers, I suggest you stop reading.. A few murders, Sookie being blamed for one, the end of her vampire marriage to Eric, Erics new arrangment to marry Freyda, a steamy scene with Sookie and Sam, a posibility of a HEA between them plus a few betrayals and plots to kill Sookie, those are all the things that made this book surprising.. I wont say that there werent things I didnt like, but those things pale in the end. I understand why a lot of fans were dissapointed with this book, I was a fan of Eric the entire series and I still am, I just dont think he and Sookie were right for each other because there werent a real future for them as a couple. Now, I must say goodbye to all these characters. It was a pleasure.