*** Soul Crossed (Of Demons and Angels, #1) by Lisa Gail Green Release Date: 02/25/15 252 pages Summary : "A wickedly romantic story that will have you cheering for Lisa Gail Green’s addictive storytelling. SOUL CROSSED is devilishly delicious!" — Martina Boone, author of COMPULSION and the Heirs of Watson Island trilogy "Soul Crossed blurs the lines between good and evil with addictive characters and plot that will have you eagerly turning the pages." ~Kelly Hashway, author of the Touch of Death series. One Demon. One Angel. One Soul. Josh lived a reckless, selfish life, so upon his death, escaping the eternal torments of Hell by assuming the role of a powerful, soul-corrupting demon is an easy choice. His first soul assignment doesn’t seem too hard: the mortal Camden is already obsessed with weapons, pain, and torture. If only Josh wasn’t distracted by Cam's beautiful friend, Grace. Grace never expected to die violently at age s
1 komentar
Pročitajte više

Waiting On Wednesday is a weekly event, hosted by  Breaking the Spine , that  spotlights   upcoming  releases   that we're eagerly anticipating. This is my choice for this week: Carry On by Rainbow Rowell Expected publication: October 6th 2015 by St. Martin's Griffin Simon Snow just wants to relax and savor his last year at the Watford School of Magicks, but no one will let him. His girlfriend broke up with him, his best friend is a pest, and his mentor keeps trying to hide him away in the mountains where maybe he’ll be safe. Simon can’t even enjoy the fact that his roommate and longtime nemesis is missing, because he can’t stop worrying about the evil git. Plus there are ghosts. And vampires. And actual evil things trying to shut Simon down. When you’re the most powerful magician the world has ever known, you never get to relax and savor anything. Carry On  is a ghost story, a love story, a mystery and a melodrama. It has just as much kissing and talking
1 komentar
Pročitajte više

It has been a long time (4 months) since I posted new covers, so prepare to be overloaxded. Of course, I wont post all new covers that were revealed in the last four months, nut I will post my favorites. Ten thousand skies above you (Firebird #2) by Claudia Gray Lion's Share (Wildcats #1) by Rachel Vincent  Hidden huntress (The Malediction Trilogy #2) by Danielle L. Jensen Breakout (Dred Chronicles #3) by Ann Aguirre Six of crows by Leigh Bardugo P.S. I still love you (To All the Boys I've Loved Before #2) by Jenny Han Welcome to Shadowhunter Academy (Tales from Shadowhunter Academy #1) by Cassandra Clare , Sarah Rees Brennan Sweet temptation (The Sweet Trilogy #4) by Wendy Higgins The Lost Herondale (Tales from Shadowhunter Academy #2) by Cassandra Clare, Sarah Rees Brennan Ink and Bone (The Great Library #1) by Rachel Caine Never Always Sometimes by Adi Alsaid Slasher Girls & Monster Boys edited by April Genevieve Tucholke Gabriel (Th
Objavi komentar
Pročitajte više

How to Unbreakup by  Rebekah L. Purdy   Release Date: 02/10/15 Swoon Romance Summary : First rule of breakups: There’s no going back. For three years, seventeen-year-old Grace Evers has regretted breaking up with Sage Castle . That day, she lost her boyfriend and best friend. And let's be honest, it's impossible to just be friends with the one person who gets you, faults and all, and loved you anyway. It's impossible not to think about how it felt to be held by him, or the way he looked right before he was about to kiss you with the most perfectly yummy kiss goodnight. And now that things are over between them, they've become strangers to one another. Sage won’t even look at Grace, let alone talk to her! Breakup life sucks and Grace is utterly miserable, doing whatever she can to ease the pain of losing Sage. She's spent the better part of high school pretending to be something she’s not and hanging out with people who probably wo
Objavi komentar
Pročitajte više

Synopsis: Hooking up is only the beginning of the fun in this sexy and irresistible second installment of the thrilling New Adult series, Boomerang. At Boomerang, one night can change everything… Adam Blackwood has it all. At twenty-two, he’s fabulously wealthy, Ryan Gosling-hot and at the top of his game in the business world. His life is perfect, until a scandal from his past resurfaces and threatens to knock the tech wunderkind down and throw his company, Boomerang, a hook-up site for millennials, into chaos. Alison Quick, the twenty-one-year-old daughter of a business tycoon—and the very ex-girlfriend of Boomerang’s former intern, Ethan—has a problem of her own. After nearly flunking out in her senior year of college, she has one chance to redeem herself to her father by proving that she deserves a place in his corporate empire. That means spearheading her father’s plan to sink big money into Adam’s company and launch it into the stratosphere—provided Adam has n
1 komentar
Pročitajte više

We have been dying to bring you the Release Blitz for Jennifer L. Armentrout's THE RETURN! THE RETURN is a New Adult Paranormal Romance and is a part of Jennifer L. Armentrout’s Titan Series. Seth is looking to be just as dangerously delicious as we all hoped!!   Amazon | Barnes and Noble | iBooks | Booksamillion Synopsis: The Fates are cackling their bony asses off... It's been a year since Seth made the deal with the gods that pledged his life to them. And so far, the jobs they've given him have been violent and bloody--which is kind of all right with him. But now Apollo has something else in mind for Seth. He's got to play protector while keeping his hands and fingers off, and for someone who really has a problem with restraint, this new assignment might be the most challenging yet. Josie has no idea what this crazy hot guy's deal might be, but it's a good bet that his arrival means the new life she started after leaving home is a
1 komentar
Pročitajte više

Waiting On Wednesday is a weekly event, hosted by  Breaking the Spine , that  spotlights   upcoming  releases   that we're eagerly anticipating. This is my choice for this week: Never Always Sometimes by Adi Alsaid Expected publication: August 4th 2015 by Harlequin Teen Dave and Julia are best friends. On the brink of high school, they made a list of cliches they would never do. Now in their senior year, Dave and Julia decide to try every Never on the list. As they break out of their comfort zone and have many adventures- both together and apart- they learn a lot more about who they are and what their true feelings are for one another. Goodreads / Amazon / B&N / Book Depository What is your WoW choice for this week?  Leave me a link in the comments.
Objavi komentar
Pročitajte više 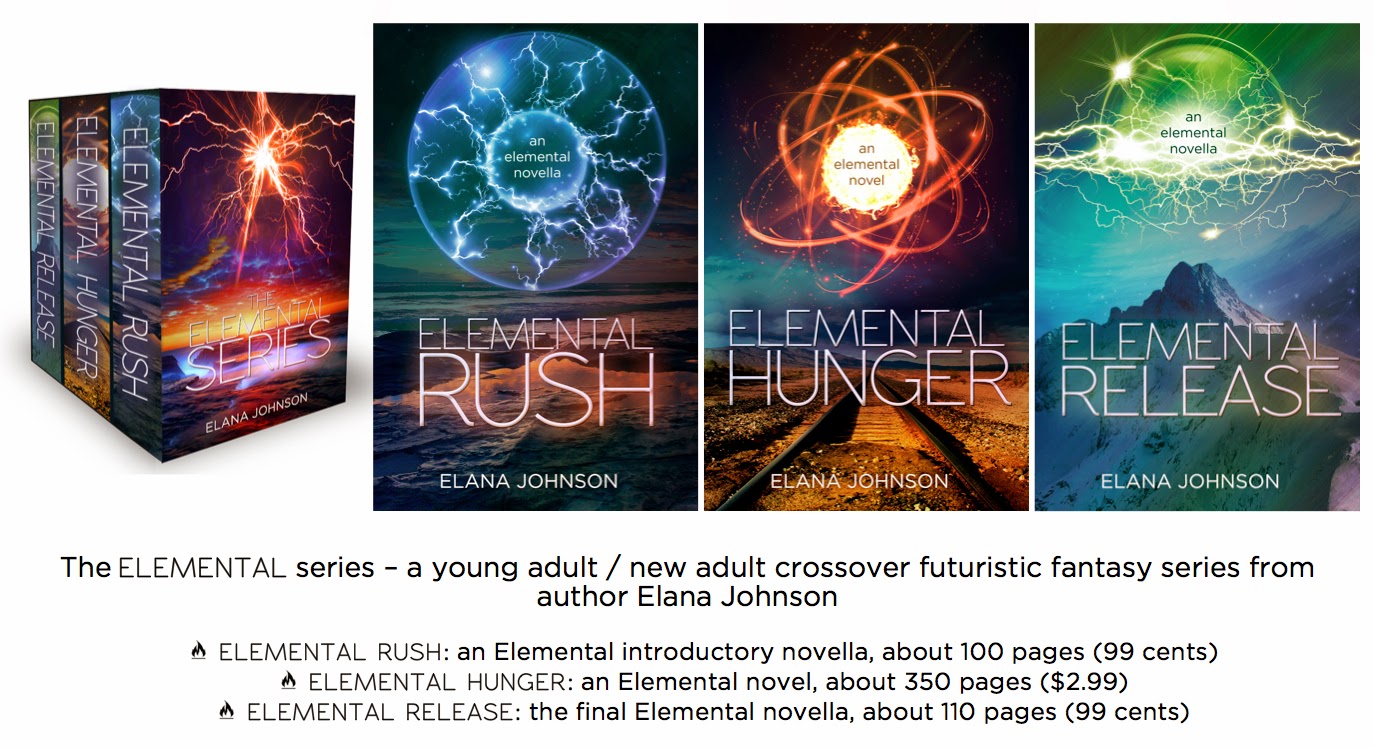 About ELEMENTAL RUSH:   Eighteen-year-old Adam Gillman has trained for twelve years to earn a coveted spot on the Supreme Elemental’s elite sentry squad. His brother, Felix, is the commander, but Adam is still thrilled when his official assignment to serve Alexander Pederson comes. He moves into nicer quarters and can stop getting up at four a.m. to complete his mandated work out time. He still rises early though, because he needs the solitude of early morning to practice his airmaking Element—something that Adam has kept secret from everyone, even Felix, because he can’t be both an Airmaker and a sentry. When Alex assigns him to kill a group of rogue Elementals, he balks at completing his mission for the first time. See, his only friend is Isaiah Hawking, and he’s the Earthmover on the accused Council. When faced with the prospect of killing him, Adam finds he can’t do it. He’s well trained in assassination, but he thought he’d be murdering bad guys—not in
Objavi komentar
Pročitajte više
Više postova