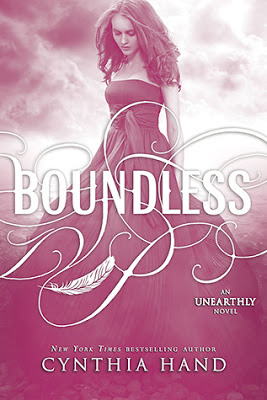 
The past few years have held more surprises than part-angel Clara Gardner could ever have anticipated. Yet from the dizzying highs of first love, to the agonizing low of losing someone close to her, the one thing she can no longer deny is that she was never meant to live a normal life.

Since discovering the special role she plays among the other angel-bloods, Clara has been determined to protect Tucker Avery from the evil that follows her . . . even if it means breaking both their hearts. Leaving town seems like the best option, so she’s headed back to California – and so is Christian Prescott, the irresistible boy from the vision that started her on this journey in the first place.

As Clara makes her way in a world that is frighteningly new, she discovers that the fallen angel who attacked her is watching her every move. And he’s not the only one. . . . With the battle against the Black Wings looming, Clara knows she must finally fulfil her destiny. But it won’t come without sacrifices and betrayal.

In the riveting finale of the Unearthly series, Clara must decide her fate once and for all.

It is a sad day when I have to say goodbye to yet another favorite series of mine. I have been with the Unearthly series from the beggining, I watched Clara trying to find her way with her purpose, I watched her relationship and friendships unfold and I was with her every step of her way to the end. This series is beautifully written, the world is imaginative and amazingly developed and the characters will stay with you long after you finished reading. Like so many other people, I was Team Tucker from the start but I also liked Christian even though I felt that he and Clara arent meant to be together. Clara faces many opstacles on her way to fulfill her purpose and since she broke Tuckers heart to protect him, it is Christian who is by her side. I expected to see her dove right into a new relationship with Christian but I was pleasantly surprised to see that she needed time. Often authors just instantly put their main character in another relationship. This book played it self out beautifully. Wee some new fallen angels and meet a few bad Triplare, we go into hell on a mission and we lose some characters on the way.  But in the end everyone ends up happy. Well, almost everyone but I am happy that this series ended on a happy note. A beautiful end for a beautiful series.