Blog tour: In too deep by Michelle Kemper Brownlow + GIVEAWAY 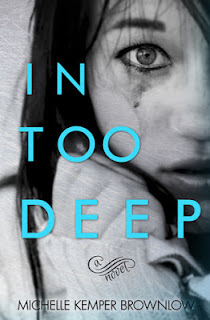 Jake, Noah’s former roommate and Gracie’s best friend, can no longer be a bystander. Gracie’s world falls out from beneath her and when she breaks she turns to Jake for strength. As Jake talks her through a decision she’s not yet strong enough to make, together they uncover a truth so ugly neither of them is prepared for its fallout. Will Jake pull her to the surface or is Gracie Jordan finally In Too Deep?

This book had my head spinning. It was full with different emotions and you can just be along for the ride. I hated Noah from the start. He is such a disgusting person but he hides it with charm and good looks so Gracie didnt see it coming. She also annoyed me a little because she was to forgiving. I just couldnt understand how she could go back to him over and over after everything he did. Jake was the bright star of this book even though he isnt perfect. He was there for Gracie every time even though it brought him nothing but pain. This book will have you cry, cringe, curse and yell at the people in it but sometme it will bring a smile to your face. This book is real, no sugarcoating, it shows us the ugly side of love and be prepared to be an emotional wreck while reading it but it is well worth it.

“Writing is my way of making sense of the world. When I give my characters life on the pages I write, it frees up space in my mind to welcome in new stories that are begging to be told,” says Brownlow

You can find the blog tour schedule here (http://www.xpressobooktours.com/2013/04/tour-sign-up-in-too-deep-by-michelle.html).