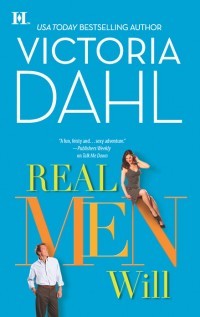 
It was meant to be a one-night stand. One night of passion. Scorching hot. Then Beth Cantrell and Eric Donovan were supposed to go their separate ways. That’s the only reason he lied about his name, telling her he was really his wild younger brother. Hiding his own identity as the conservative Donovan. The “good” one.

But passion has its own logic, and Eric finds he cannot forget the sable-haired beauty with whom he shared one night of passion. When Beth discovers that Eric has lied, however, she knows he cannot be trusted. Her mind tells her to forget the blue-eyed charmer. If only every fiber of her being did not burn to call him back.

I longed to read a good romance book, without paranormal or other in it, just pure romance with a little comedy and Donovan brothers brewery series was a perfect choice. There are three books in this series, each from a Donovan POV but Real men will, with the oldest Eric and his love interest Beth is by far my favorite. Eric is the most complex member of their small family, who feels the weight of the family name on his shoulder and he felt that way when his parents died many years ago and he had to raise his siblings. In a way he never really enjoyed life, always working and being protective of his siblings, sometimes being overbearing and stubborn. Beth came from a religious family, very traditional and she works in a type of sex shop and writes a sex column and her strict father knows nothing about it. She and Eric had a one night stand months ago where he used his brothers name so he could feel free and have fun but when Beth finds out, she cant trust him again. They meet again, fight, sparks fly and so they decide to have a no strings attached relationship. Many problems come between them, family and the law, but they overcome it. A good, relaxing read, perfect for the beach.