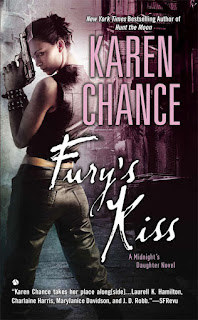 God, I missed Karen Chance´s writing so much. I adore her Cassie Palmer and Dorina series, this amazing world that she created with even more amazing characters who get under your skin. I could never decide if I liked Cassie or Dorina better since they are both great, kick – ass characters with bucket loads of courage and attitude. But Dorina somehow fascinates me more, with her dhampir nature which gets more explained in this book, about both her human and vampire side. Her father, Mircea *swoon*, is one hell of a person and vampire and we see some new sides of him I never expected to see. I was thoroughly entertained by Marlowe, he is an enigma which I hope we see some more in the future books. The there is Lous – Cesare *sigh* That dude is really yummy and sexy and fierce and skilled and charming and I could goo on about him forever. Karen Chance really creates fantastic love interests and Lous – Cesare is one of the best I had the pleasure of reading about along with Mircea ( and Pritkin ).

I thoroughly enjoyed Fury´s kiss with the intense, frustrating and nerve wrecking situations, hot romance, lots of battles and blood and plenty of surprises. I cant wait for the next Karen Chance book. 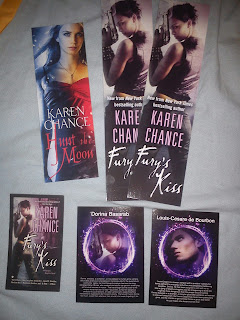 I have three swag packs to give away. One pack will include: 2 Fury´s kiss bookmarks. 1 Hunt the moon bookmark, 1 Fury´s kiss magnet and 2 trading cards – one for Dory and one for Louise – Cesare.
The giveaway is international and all you have to do is follow this blog either by GFC or by Linky and comment on this post with your email address and answer to the question-

Who is your favorite vampire character? It could be a character from a book, movie or tv series.

The giveaway will last until October 13th, 23:59 GMT and on Sunday I will randomly choose 3 winners and notify them by email. Good luck !