Taming the Storm (The Storm #3) by Samantha Towle 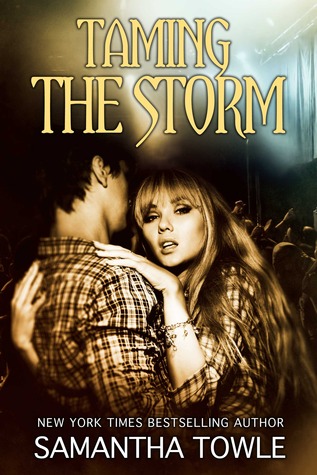 Her father has let her down her whole life. Her brother betrayed her in the worst way possible. And her past relationship experiences with men have been less than great.
Lyla is focussing all her energy into her band, Vintage, so when they receive an offer to sign with TMS Records, it seems that things are finally turning around for her. The last thing she wants is a man getting in the way.

But an unexpected friendship is formed. A closeness neither of them expected. Putting one chastity belt and one lamp that is in desperate need of rubbing, to the test.

Will the sex storm that is Tom Carter, finally find himself tamed by the rock chick with a hardened heart, or will he go back to his womanizing ways…?

“I would rather have a moment of everything with you than a lifetime of nothing.”

Another series to say goodbye to, it never gets easy. I loved this series from the first book, when Jake and Tru reunited after all those years. I liked the 2nd book, it was not as good as the first but it was good nonetheless. I was eagerly expecting Taming the storm because Tom quickly became one of my favorites in the series and I couldnt wait for his story.
Lyla and her band are preparing to go on tour, months after her heart got broken, but their manager falls while skiing so she is not able to go. The record company sends a replacement and that is no one other than Tom Carter, bassist of The Mighty Storm, famous womanizer and the guy that hit on Lyla a few time and views her as a challenge. They have a  few tense moments on the tour  bus but they quickly develop a beautiful friendship, while there is also some sizzling chemistry between them.
This book was full of laughter and sexy moments, tears and forgivness. Tom matured a lot in this book while falling in love and Lyla learned the power of letting go. They are a wonderful couple and I was happy they found each other. A nice end for this series.