Kiora thought she had never heard a lie until she was sixteen. But she was wrong. Her entire existence was based on nothing but. She thought that evil did not exist. Lie. That magic was not real. Lie. And that the land of Meros was all there was. One more lie.


Wings of Tavea (The Solus Trilogy #2) by Devri Walls 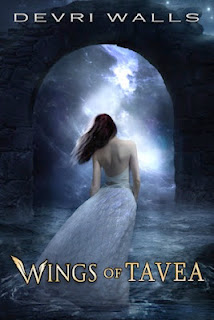 Kiora is rapidly learning that evil and lies come in shades of black and white and swirling greys, but nothing could have prepared her for the shock of leaving Meros.

My review:
This series is continuing to surprise me. The world the writer created is breathtaking and interesting. Every creature is amazing, especially dragons and Shifters. I  love absolutely everything in this series, but the only thing that annoys me a little is Kiora. She is whining almost all the time. Ename is a funny character, brave and loving and I consider him and Alcander the best part of this book, besides the creatures. The storyline is inventive and it keeps you on the edge. I hope that this love triangle resolves itself in the next 2 books because I really hate those things. But, I wouldnt want to be in Kioras shoes because both guys are incredible in their own way, though I am still Team Ename. I really look forward to the rest of this series, there are a lot more things to learn.

Here is the excerpt from the first book "Wings of Arian":


Kiora, Emane and Drustan soared over the valley below. “What are you supposed to be anyway,” Emane demanded, poking at Drustan’s pink fur around him.
“I am a Shapeshifter. I can be anything I want.”
“Are you telling me this is an actual animal?”
“What do you think?”
He snorted, “You are a big, pink, fluffy, flying dog iguana looking… thing. It can’t possibly be real.”
“Not that long ago, you would have said the idea of a creature being able to change its shape was preposterous, would you have not?”
“That’s not the point Drustan. I am asking you if this is an actual creature or not.”
Drustan let out a loud laugh that echoed through the sky, “Of course not Emane! Don't be ridiculous.”
“I knew it! Then why are we soaring through the sky on this pink monstrosity?”
“I was trying to cheer up the lady, if you must know.”
Emane looked at Kiora who was sitting in front of him. She was staring forward, seemingly unaware that they were even speaking.
“It doesn't seem to be working.”
“Perhaps you can do better?”
“Kiora?” She didn't flinch. “Kiora?” Emane nudged her gently.
She jumped, coming back to reality, “Hmm? What? I'm sorry Emane, were you talking to me?” She turned her head to the side, but her eyes didn’t meet his. They remained distant, looking out over the trees.
“Are you ok?”
“Umm, of course. Why wouldn't I be?”
“I don't know, I was wondering the same thing. We did just manage to defeat a pack of Hounds and twelve Fallen Ones. Which, by the way– Drustan, you and I will have words over your little stunt.”
“Whenever you’re ready, my Prince,” Drustan answered with amusement.
Emane rolled his eyes, “Anyway, as I was saying, we managed to survive our first real battle. And you, what you did with that water was… well, it was something I will never forget.
She forced a smile, “That worked better than I expected.”
“Better than you expected!” he exclaimed, grabbing a hold of her shoulders. “You should have seen yourself. I looked over to see you standing there– in-between two enormous walls of water! And then when you sent it crashing forward, it was amazing.” Setting back he amended. “Of course it was more amazing after I realized I wasn't going to die.”
“I wouldn't have been able to do it had you not healed my arm.”
“That reminds me, let me see that arm.” Emane leaned around her side to see where Vitraya had cut her. “I didn't know they could do that.’
“Me either.”
He glanced up at her, her voice was nearly monotone, and forced. Scowling, he looked at her blood soaked arm and sleeve. “You lost a lot of blood.”
“It was deep.”
“Kiora,” he asked again, “what's wrong?”
“Nothing. Drustan where were you?”
Emane’s head snapped up, he knew she was changing the subject but this was an answer he was dying to know. “Yes Drustan, where were you?”
“I was in the meadow, right where you left me, Prince.”
“Drustan,” Emane closed his eyes trying not to yell, “you are the most infuriating creature I have ever met!”
“It is an effort, I assure you, my Prince.”
He took a deep breath, refusing to take the bait, “I thought I told you to turn into a Dragon as soon as I set you down. And instead, we don't see hide nor hair of you till half way through the fight.”
“It was a strategic decision based upon experience.”
“How so?”
“Is the Prince asking my humble opinion?”
“No, the Prince is asking for your humble explanation, Drustan!”
“That’s too bad, listening to the opinion of someone who is experienced with the enemy would be wise.”
Emane took another deep breath. He was right, he knew he was right. But he really hated admitting he was wrong, especially to a flying pink iguana. “I will keep that in mind.”
“Emane…” Kiora chided.
“What?”
“Just say it.”
“For not being a mind reader,” he grumped “you are disturbingly good at knowing what I am thinking.”
She shrugged her shoulders.
Author Bio & Links:
Devri Walls lives in Kuna Idaho with her husband and two kids. She has worked as a music teacher and currently, a preschool teacher. She majored in theater and her love of a story still drives her today. Thankfully, she has finally found an outlet for all the voices in her head. Her first novel, Wings of Arian, is available on Amazon, Barnes and Nobles and Apple. The second book in the Solus trilogy, Wings of Tavea is scheduled for release Nov 2012.

-Author website
-Goodreads
-Facebook
-Twitter
There are 2 giveaways. One is for a Kindle copy of either Wings of Arian or Wings of Tavea. Winners pick. Just leave a comment with your email until tomorrow. The second giveaway is for the blog tour grand prize. Just fill out the rafflecopter.
a Rafflecopter giveaway