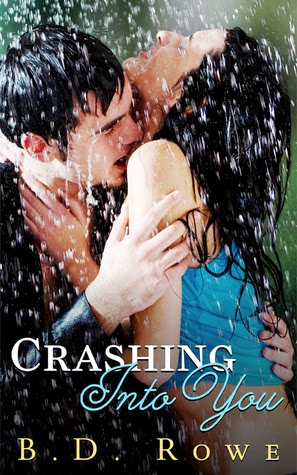 Bookish college sophomore Sydney Baker wants Evan Taylor with every ounce of her being. The hottest stud on campus, Evan is six foot four, ripped, stacked with muscles. He’s even easy to talk to.

But when Melanie tragically dies after a night of wild partying, Sydney and Evan turn to each other in a time of intense grief. And it doesn’t take long for their close friendship to blossom into something more.

Unfortunately for Sydney, secrets from the past soon put her relationship with Evan to the test. Especially when a sexy blonde freshman makes her way into Evan’s life, and tries to rip away everything Sydney holds close to her heart.

We stood behind a pair of palm trees, which hid us from the main path, and any potential students walking by. We were not just hidden, though; we were totally alone. It was my cue to walk over to the main door and head inside, but my feet didn’t budge. I really, really didn’t want this night to end. “So did you want to meet up again tomorrow and do some studying, or…” My words trailed off, when Evan took my hand. He stepped closer to me. “Your hand is so cold,” he said. I stared at his neck for a moment—that’s where my eye level was. I was afraid to look up. I was terrified, and crazy fucking excited. I breathed in, through my nose. He smelled of cinnamon, of fresh-baked snickerdoodle cookies. “I must be cold blooded,” I said, and finally gazed into his eyes. He smiled, and brought both his hands up to my shoulders. “Evan?” I turned away. “What are you doing?” He leaned his head down and brushed his lips against my cheek. His mouth hovered over my ear. “Don’t tell me you’ve never thought about it.” Then he kissed me, lightly, on my neck. My knees buckled. If Evan hadn’t been pushed up so close to me, I would have collapsed to the ground. “Oh my God… Evan.” He wrapped his arm around my back, and pulled me even closer. I wanted this. I wanted this so much. I’d been dreaming about it since the moment I first laid eyes on him, way back in English 101, freshman year. But it didn’t feel right. Not with my roommate still in the picture. Not with their anniversary just days away. I wanted Evan completely, but not like this. He stared into my eyes. Touched his fingers against my chest. “Evan…” I said. He smiled, and moved his lips toward mine. “Sydney…”I pulled away. A small raindrop touched the top of my head. “Whoa, what?” I looked up. “Did you just feel that?” “Huh? Feel what?” “I think it’s…” I didn’t even have to finish my sentence. The rain started coming down hard, and fast. “Oh crap,” Evan said. “Run!” I shouted, and we both raced around the trees, over to the front of McCarthy Hall. The rain pelted the ground so hard that by the time I found cover under the canopy, I was drenched with rain from head to toe. Evan joined me at my side, just as soaked as I was. I pointed at him, and we both started laughing. “I guess Melanie was right, after all,” I said. He nodded, as he patted his hands against his ruined jacket and jeans. “Yeah, I guess she was.” He reached his hand toward mine again, but he didn’t try to touch it. He had to know as well as I did that our little moment had passed. “Did you…” Evan started. “Did I what?” He bit down on his lower lip, like he wasn’t sure if he was allowed to ask it. “Did you want me to walk you to your room?” I sighed. Of course I did. I wanted it more than anything. But I knew he couldn’t. I shook my head. “I don’t think that’s a good idea, Evan. I think I’m just gonna go to bed.” He nodded, real fast, and said, “All right.” I put my card in the slot. Pushed the door open. “I’ll see you later, okay?”I entered the building and let the door shut behind me. When I reached the other side of the entrance hall, I turned around and waved. He was still outside, still in the cold, still with the rain to contend with. He waved back, with little enthusiasm. He turned around, put his jacket over his head, and started running back down the hill.

B.D. Rowe is a Sacramento native with a penchant for crafting tales of romance, mystery, and intrigue. You can often find B.D. at the local coffee shop drinking white chocolate mochas and writing into the wee hours of the night. This is B.D.'s first New Adult novel.