ASHES TO ASHES (Experiment in Terror 8)
by Karina Halle 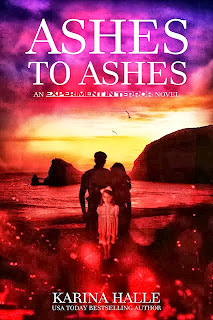 When the team is sent back to the stormy Oregon coast to investigate a haunted school, Perry wants to use the opportunity to reconnect with her family and reintroduce Dex into their lives. Only Perry’s not the only one who’s reaching out – her grandmother Pippa has started appearing to her with disturbing warnings and Perry’s presence at the school has ignited a chilling new wave of supernatural phenomenon. Once used a century ago as a sanatorium to house children dying of tuberculosis, the school’s past residents are slowly coming back to life and with one thing on their mind: They want someone to play with, someone to join them. Forever.

Even when dead, some children get whatever they want.

And they want Perry.