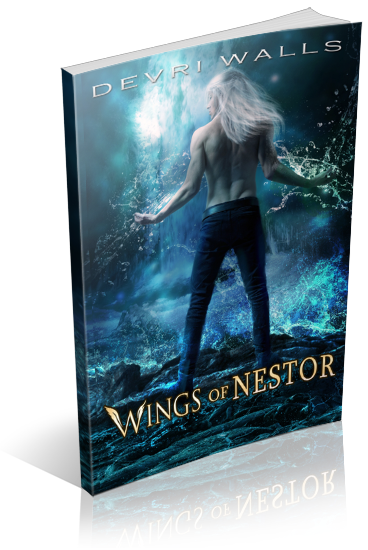 Synopsis:
Kiora needs answers. Who is the Shadow? Who is Jasmine? Are they connected? And even more pressing: how can she stop Shadow from using Kiora’s dreams as a map to find them? They have escaped three times, but are living on borrowed time—and everybody knows it.

Her search for help will push her closer to Alcander, send her to the dragon mountain of Toopai, and straight back to Meros—where magic will finally return to the land of no magic. Answers will be uncovered and plans unearthed that have been waiting for thousands of years.

But with the Shadow’s forces gathering, it looks like the land’s path is hurtling towards one outcome: war with the Shadow and death to all rebels. Armed with knowledge and hope, Kiora is determined to change that path. But will fate allow it? Or will it deal her a hard lesson about following ones own destiny?


Wings of Nestor is the 3rd breathtaking installment in the Solus series and I am still spellbound. This fantastic, magical world that Walls created is so wonderfully developed and the story continues to be interesting and unpredictable. Kiora improves in this book and Emane and Alcander are both wonderful. I am sad because whichever choice she makes in the end, one guy will be hurt by it. Since Alcander is bonded to Kiora, she is his one and only for his life. In this book, Emane would still be my choice since he shown maturity and loyalty. I am aching to see what happens next.

Grand prize giveaway
Prizes:
A 25.00 Visa gift card,
A signed paperback - their choice of volume
A signed poster of Wings of Nestor,
Signed bookmarks
Open to US/Can
a Rafflecopter giveaway

2nd giveaway:
For your choice of an ebook in the series leave a comment with your email address and how you follow  on this post by September 12th 2013. International.


You can find the blog tour schedule here (http://xpressobooktours.com/2013/06/07/tour-wings-of-nestor-by-devri-walls/).

Synopsis:
Kiora thought she had never heard a lie until she was sixteen. But she was wrong. Her entire existence was based on nothing but. She thought that evil did not exist. Lie. That magic was not real. Lie. And that the land of Meros was all there was. One more lie.

Synopsis:
Kiora is rapidly learning that evil and lies come in shades of black and white and swirling greys, but nothing could have prepared her for the shock of leaving Meros.

Devri Walls lives in Kuna Idaho with her husband and two kids. She has worked as a music teacher and currently, a preschool teacher. She majored in theater and her love of a story still drives her today. Thankfully, she has finally found an outlet for all the voices in her head. Her first novel, Wings of Arian, is available on Amazon, Barnes and Nobles and Apple. The second book in the Solus trilogy, Wings of Tavea is scheduled for release Nov 2012.