The Distance between us by Kasie West 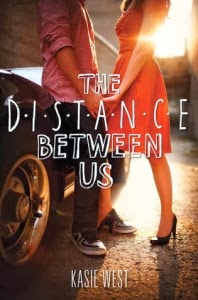 
Seventeen-year-old Caymen Meyers studies the rich like her own personal science experiment, and after years of observation she’s pretty sure they’re only good for one thing—spending money on useless stuff, like the porcelain dolls in her mother’s shop.

So when Xander Spence walks into the store to pick up a doll for his grandmother, it only takes one glance for Caymen to figure out he’s oozing rich. Despite his charming ways and that he’s one of the first people who actually gets her, she’s smart enough to know his interest won’t last. Because if there’s one thing she’s learned from her mother’s warnings, it’s that the rich have a short attention span. But Xander keeps coming around, despite her best efforts to scare him off. And much to her dismay, she’s beginning to enjoy his company.

She knows her mom can’t find out—she wouldn’t approve. She’d much rather Caymen hang out with the local rocker who hasn’t been raised by money. But just when Xander’s attention and loyalty are about to convince Caymen that being rich isn’t a character flaw, she finds out that money is a much bigger part of their relationship than she’d ever realized. And that Xander’s not the only one she should’ve been worried about.

The distance between us was a cute and funny read. I loved both Caymen and Xander who are both interesting characters and together are perfect. Caymen is from a different world than Xander, her mother and her struggle with money while Xander is rich, and that is the reason Caymen desperately wants to avoid him. The developement of their relationship was slow and interesting, there is no insta-love in this story, they slowly become friends  and are taking their time getting to know each other. Caymen has a dry, awesome sense of humor and I often laughed out loud. Her best friend Skye and her boyfriend Henry were also great characters. But Xander is the most interesting character in this book. A  guy who doesnt want to do listen his father tells him even though his father may be right. A gentleman, sweet and swoony, there is no girl who wouldnt fall for him. There were a few secrets revealed near the end, a few tears and a nice ending to this story. I also loved the writing, will definetly read other books from Kasie West.