Into the Fire (Hot Nights Series #1) 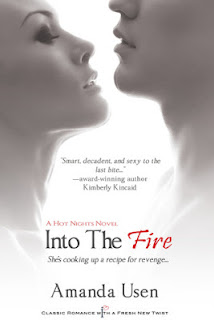 Jackson Calabrese has a lot of nerve. He beat Lila Grant in the Culinary Academy competition using her recipes. Now, he’s opening a restaurant and wants her help? Fine, she'll fix his menu, but it's going to cost him.

Heir to the Calabrese restaurant empire, Jackson can buy anything he wants, except creativity, so he buys Lila's instead. He can craft perfect paella, but to take New York by storm he needs her innovative spark.

Skillets aren't the only things hot in the kitchen, and an uneasy truce ignites into passion. They’re great in bed, but Jackson doesn't trust her, and Lila is contemplating revenge. The restaurant opening approaches, the menu is completed, and the tables are set for one final act of betrayal. How can love bloom in the midst of such a hot mess?

My Hot Nights series is set in the kitchen because I’ve spent a lot of time in kitchens over the last twenty years, first cooking professionally and then in culinary school, where I met my husband. After graduating, I spent a decade working as a pastry chef before I began teaching pastry arts classes at a local community college and writing romance novels about chefs…while sitting at my kitchen table. Full disclosure: sometimes I write at my desk in my bedroom, but during the summer it’s a lot easier to oversee the chaos of my three kids from the kitchen table—or at least pretend to see!

Speaking of kids, we all went back to school on the same day this year, and while I was school shopping, I fantasized about fall soups. School supply shopping can get rough, and I needed a happy place. My mouth watered as I pondered my favorite fall soup, a rich chicken broth with sausage, fennel, Swiss chard, white beans, and tortellini, kicked up with just enough red pepper flakes to make things interesting. This soup literally brought me back to life after my first child was born, and it figuratively brought the heroine of LUSCIOUS, my second book, back to life. It’s filling, friendly, and easy to throw together on a school night, especially if you have some leftover cooked sausage on hand. And don’t forget the crusty bread!

Tortellini and Sausage Soup with Beans and Greens* 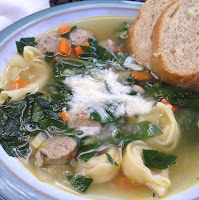 Parmesan or Asiago cheese for garnish


Heat oil over medium-high heat. Add onion, carrot, and fennel. Cook until limp.
Add garlic. Saute one minute, until it smells heavenly.
Add broth and red pepper flakes. Bring to a simmer. Cook until vegetables are tender.
Meanwhile, cook tortellini separately, so they don’t suck all the broth out of your soup.
When pasta is drained and the vegetables are tender, stir in white beans, sausage, and greens. Simmer until greens wilt.
Put 6-8 tortellini in each soup bowl then add soup. Serve with grated cheese.

* If you want to make this soup a day ahead, do not add the tortellini until you plan to serve it.

Excerpt from INTO THE FIRE

“Have you lost weight?” He tensed, wondering if that were a safe question to ask a woman holding a sharp object, no matter how small.

She snorted. “Only twenty pounds.”

“Why? You weren’t overweight.”

“Hunger will do that to a girl. It also helps that I never make that truffled mac and cheese I couldn’t resist back in school.” Her eyes were blue and sharp as she raked him from head to toe. “You don’t look like you’ve spent much time being hungry, but I imagine the prince of the Calabrese restaurant empire doesn’t suffer from plebeian problems like where his next meal is coming from. You have more important things to worry about—like where to buy the biggest, fattest goose livers.”

He had more to worry about than that, but he wasn’t looking for her sympathy. He picked up another hors d’oeuvre and stuffed it into his mouth. “Yup, got no problem keeping my weight up.”

She snorted again and bent to cut even strips from a roasted red pepper. She set the knife aside and coiled a strip on top of each shortbread. After the red pepper came a lump of creamy goat cheese. He could imagine how good they would taste now. Woodsy rosemary. Earthy mushrooms and olives. Sharp pepper and tangy goat cheese. He reached for one more, but she batted his hand away from the tray.

All the way through culinary school, they’d battled for top ranking, his speed and technical brilliance competing with her ability to take a classic flavor profile and turn it into something new and exciting. He looked at the tray of exquisite hors d’oeuvres, and tension shot up the back of his neck. If he had her gift for flavors, he wouldn’t be working twelve-hour days and his new menu would be ready to roll.

He took a deep breath and slowly released it, dispelling the headache before it could get its claws into him. He imagined her offering the tray of hors d’oeuvres to him with a seductive smile instead of smacking his hand. He replaced her French maid’s uniform with something even sexier—a silky, black negligee that displayed her magnificent breasts and made her red-gold hair glow. He added a glass of champagne to her imaginary tray. Then he added another one.

“Take a picture, it will last longer.” Her voice shattered the inviting image in his head. He blinked and found her glaring at him. “Have you seen enough yet? Or have you run so low on inspiration you want to see the rest of my hors d’oeuvre menu? Here,” she thrust a paper into his hand, “let me spare you the time and trouble. You can have my notes, with all the components neatly labeled. I’ll come up with some new ones.”

He feigned nonchalance as he glanced at the list, but every item made him hungry. “If it were that easy for you, you would have beaten me.”

The cold fury in her blue eyes warned him to step back from the table. Instead, he leaned closer. There was one more thing he wanted to know. Maybe it would help him put this whole thing behind him. She was too good a chef to go down in flames without a damn good reason. “Why did you choke during the competition?”

The anger in her eyes went from ice to blue fire. “That’s low, even for you, Calabrese,”  she hissed. “I don’t know why you came back here, but you aren’t going to get an apology from me, and I’ll be damned if I’ll offer congratulations. How about this? You’re welcome. Now get the hell out of my kitchen.”

“Make me.” He snagged an hors d’oeuvre from the center of her tray and popped it in his mouth. It was every bit as good as he had imagined. His alluring mental picture of Lila returned, but this time, she was in his bed. “Come on—I dare you to throw me out of your kitchen. I bet we’ll both enjoy it.”

He didn’t think she’d actually do it, and her rough shove caught him by surprise. He stumbled as she bulldozed him across the room, fortunately catching his balance before they reached the door. He swerved to the right, spinning so that his back hit the wall instead. Expecting to push him out into the hall, she kept going and slammed into him. He wrapped his arms around her waist. “Now this is what I’m talking about.”

He expected her to protest, to yell, or maybe even slap him, but instead she gasped and froze. Her eyes were shut and when she opened them, he saw the same stark desire that had consumed him for months. He couldn’t have stopped, even if he’d wanted to. He bent his head and kissed her.

Grand Prize: (US only) 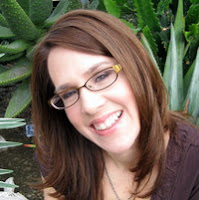 Amanda Usen knows two things for certain: chocolate cheesecake is good for breakfast, and a hot chef can steal your heart. Her husband stole hers the first day of class at the Culinary Institute of America. She married him after graduation in a lovely French Quarter restaurant in New Orleans, and they spent a few years enjoying the food and the fun in the Big Easy. Now they live in Western New York with their three children, one hamster, two guinea pigs, a tortoise, and a new-to-them beagle. Amanda spends her days teaching pastry arts classes and her nights writing romance. If she isn’t baking or writing, she can usually be found chasing the kids around the yard with her very own hot chef husband. Visit Amanda at http://www.amandausen.com, where you can find recipes for many of the yummy dishes in her books. She can also be found on Facebook (https://www.facebook.com/amandausen) and Twitter (https://twitter.com/#!/AmandaUsen) if you want to chat about romance, writing, or recipes.