Julian is drop-dead gorgeous, annoyingly provocative, and he’s fast becoming her best friend. But he also has a secret that makes the little hairs on her arms stand on end…

My name is Jona Montiniere, and that’s pretty much the only good thing to say about me.

I’m seventeen, I’m snarky, and I’m a crap-load of trouble. Or so they say. But what did they expect from me really, when they dumped me in an orphanage at age five? That I’d grow up to become the new first lady? Nah, I think it’s much more fun to raid Camden Market in London with my friend, Debby. She’s cool. She lives on the street. I learned so much from her.

The only thing she missed to teach me was how to tend to a vineyard. And yeah, that’s what I’m going to do for the next 6 weeks, courtesy to this darn judge, who sent me off to France after I was caught stealing again. Fair enough, the vineyards are okay, and so are my aunt and uncle, who I haven’t met up ‘til now. What isn’t okay, and I mean it, is that I have to live in the same house with my mother, that god-awful dragon, who spurned when I was only a child. And now she wants me back? Demands my forgiveness? Why, because she’s about to die of cancer? Uh-uh. Sorry, but that’s not gonna happen. I want no contact with that woman, thanks.

But what’s Julian got to do with all of this? About my age, he’s too young to be my mother’s lover. So why doesn’t he leave her side? Ever. He’s different, as in the paranormal kind of different, but he’s sa-woon-worthy gorgeous. He obviously has secrets, but he’s also get-under-my-skin charming. In short, he’s a riddle to me. But he likes me, and that’s scaring the shit out of me. I sure won’t let anyone come too close.

So now I’m wondering only two things: How did he manage to hold me in his arms after only three days? And how the hell do you keep an angel earth bound?

This was  lovely read, a story about forgiveness, love and new begginings. There were times I was reminded of Twilight and Heavenly series by Jennifer Laurens but all in all, great. I liked Jona, she was feisty and funny and I felt for her with everything that happened in the past and with everything that happens in the book. Julian was awesome. Of course, I knew what he really was from the beggining but it was interesting to see Jonas suspicions and her finding out. I liked how it all played out in the end, that three little words finally bring back happiness to Jona. Great read. 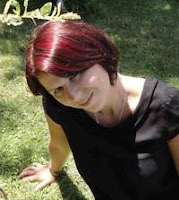 The quick-and-dirty:
I’m a cool girl with a passion for writing.
The genres you’ll find me hanging out at are contemporary and paranormal YA, but I’m also snooping into some adult paranormal right now. All of them romances…of course.
The nitty-gritty:
I’m an Austrian lass—totally uncomplicated and up to anything fun.
I grew up in Vienna, not by free will but because my parents decided to move there when I was only 4 years old. I. Hated. The. City. Everything about it. So right after graduation I moved back to Upper Austria, where I settled down with a nice husband and an awesome laptop.
I’ve been a storyteller all my life. Already in kindergarten, I came up with the most exotic fantasies and tales. My teacher would call me a liar. I call it the cornerstone of my writing career.
People always told me you can’t make a living with being an author. So when my first novella PLAY WITH ME came out and shot straight to the stars within the first week, I was totally dumbstruck. Took me a while to realize what was happening, LOL.
And the personal stuff:
At the (awesome) age of seventeen, I met the love of my life. But he was a playboy, and I was so not going to be his next trophy. It took him another four years of fighting for me until I finally decided to give that “couple-thing” with him a shot. I’m now married to this man. ;-)

We have an eleven-year-old son, and together we travel a lot…although I sometimes wish the trips were shorter because I can’t wait to get back to my laptop and my many stories. Unless we’re in Disneyland. No stress to go home then…

If you still want to know more about me, my FAQ page is the right address for you. ;-)