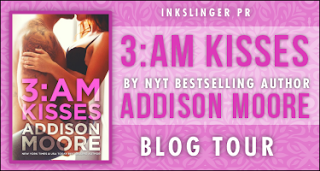 Synopsis:
Baya Brighton is looking forward to her first year at Whitney Briggs University, new friends, dorm life, and finally being close to her brother again. Love is the last thing on the list, but when Baya meets her brother’s roommate she begins to have thoughts and feelings that make even her blush.

Bryson Edwards has a secret he prefers buried in the past and long forgotten. He prefers loose girls, fast cars, and long nights working at the string of bars his family owns. When his roommate’s sister shows up on the scene, she’s far too innocent and sweet for him but he can’t shake Baya out of his mind and worse, it looks like she’s seeping into his heart as well.

Baya seems determined to show her brother she’s not a little kid and equally determined to use Bryson’s body to prove her point. It’s been made pretty clear that Baya is off limits to Bryson but their undeniable sparks explode into a whole lot more than just a few 3:AM KISSES. 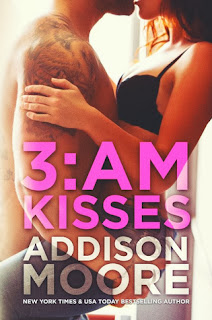 A nice, late summer read. A tipical love story, with interesting characters and a few interesting situations. I liked Bryson, even though he acted like a jackass sometimes but if Baya were more into herself, she would have made him work for it more. I disliked Bayas brother who is a hypocrite and I look forward to reading someday about a girl putting him in his place. This is a story with two different people, both with tragedies in their lifes, fading their place in the wolrd, together.

(Baya’s Point of View, with Bryson.)

“So”—I lean into the doorframe—“is this where you stash all the girls you bring home for the weekend?” I don’t know why I went there. I guess, deep down, a part of me wants to know just how many girls his mother might find illegal.

“I guess so.” Bryson takes in a breath as he settles my bag at my feet. “I’ve never brought a girl home before, so in a way I’m setting a precedence with you.”

My heart thumps its way into my throat. My ears pulsate with a rhythm all their own. Bryson Edwards has never brought a girl home before and now that girl is me.

“I don’t know what to say,” I whisper as he comes in close, his breath feathering over my cheek.

“Say this.” Bryson covers my mouth with his and we indulge in a heated exchange right there in the doorway. His tongue roams over mine, his teeth bite over my lip playfully. I don’t stand a chance this weekend. I’m already his in every single way.

Biography:
Addison Moore is a New York Times, USA Today, and Wall Street Journal bestselling author who writes contemporary and paranormal romance. Previously she worked as a therapist on a locked psychiatric unit for nearly a decade. She resides on the West Coast with her husband, four wonderful children and two dogs where she eats too much chocolate and stays up way too late. When she's not writing, she's reading.