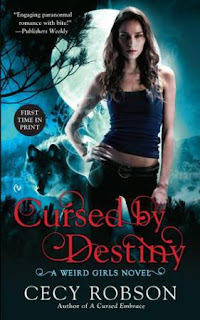 Celia Wird and her three sisters are just like other 20-something girls—with one tiny exception: they’re products of a backfired curse that has given each of them unique powers that make them, well, weird…
Celia’s a girl in trouble. Her heart is bound to Aric, but he is a purebloodwere who must deny her or risk condemning his species to extinction. And that’s just her love life. She’s also been called to take down a group of demon terrorists looking to overthrow the paranormal world. (No pressure.)
In order to bring them down, Celia must ally herself to Misha, the master vampire who has made no secret of his desire for her.
And if that weren’t enough misfortune for one girl, a clairvoyant’s prediction could destroy Celia and Aric’s love for good. The only way to protect the world from unbridled supernatural terrorism is for Celia to bind herself to her destined mate. And that doesn’t appear to be Aric.