Never underestimate the power of a woman

on a double espresso with a mocha latte chaser high. 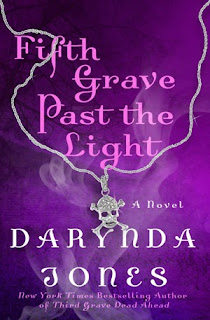 Charley Davidson isn’t your everyday, run-of-the-mill grim reaper.  She’s more of a paranormal private eye/grim reaper extraordinaire.  However, she gets sidetracked when the sexy, sultry son of Satan, Reyes Farrow, moves in next door. To further complicate matters, Reyes is her main suspect in an arson case.  Charley has vowed to stay away from him until she can find out the truth…but then dead women start appearing in her apartment, one after another, each lost, confused, and terrified beyond reason.  When it becomes apparent that her own sister, Gemma, is the serial killer’s next target Charley has no choice but to ask for Reyes’ help.  Arsonist or not, he’s the one man alive who could protect Gemma no matter who or what came at her. But he wants something in return. Charley. All of her, body and soul. And to keep her sister safe, it is a price she is willing to pay.

Charley Davidson is at it again in Fifth Grave Past the Light, the sexy, suspenseful, and laugh-out-loud funny fifth installment of the New York Times bestselling series by Darynda Jones.

After a longish wait for the 5th book in the Charley Davidson series, the day has finally come. I was fortunate enough to receive an eARC to review for this blog tour, and when I saw the invite for NetGalley I screamed. That was one of the happiest days I had in a long time. This series is a favorite of mine and I savor every page. It was no surprise to me that Fifth grave past the light is the best book in this series, and I assure you they are all amazing so it was not a small thing to write an even more fantastic book. Charlie is even more funnier, but she also gets more serious. We learn more about her abilities, we see how she deals with her new neighbour *wink* and we finally find out what happened to Garett when he was in hell. We also see a little bit more of Gemma and Quentin, who we met in the last book and who is still adorable. Then there is the famous son of Satan, Reyes. He is as hot as always, more tender and more fortcoming, and I was super happy to see the relationship between him and Charley bloom and become more serious. In this book Charley is investigating a serial killer since a bunch of terrified dead women show up in her apartment and her proces was interesting and hilarious as always. Then there was another near death incident which really made me sad for her. And, last but not least, Cookie is still the most amazing friend and a best supporting character I ever read about and her interactions with Charley are the funniest sentences I ever read. In the end, all I have to say is that Darynda Jones did and amazing job yet again and shown us that she is an fantastic author whose books will always be at the top of my list. And people, watch out for the last sentence in the book. I neraly had a stroke *wink*.

Giveaway
1 Autographed copy of Fifth Grave Past the Light to one lucky winner. 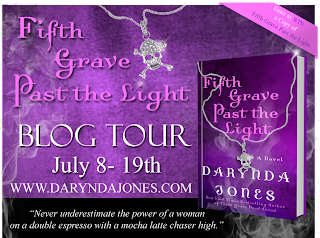