Blog tour:To my Hero: A Blog of our Journey Together by Danielle Sibarium + GIVEAWAYS

It would’ve been different if I had courage, even an ounce of it. But I was a coward from the day I met you, Ryan Crowley. I still am. In the end it doesn’t matter. The bottom line is the same. It’s my fault.

When the unthinkable happens Carly Cavanough is left beaten, betrayed, and devastated. Her best friend doesn’t understand. Her parents won’t listen. Everyone in her life turns against her. She’s alone. Completely alone, except for Ryan Crowley, the boy she’s been crushing on for years. She won’t admit to him what she can’t admit to herself. But he understands without words. He knows more about what she’s going through than she can possibly imagine and he knows what it will take to start the healing.

With Ryan’s help Carly begins to piece together the fragments of her once perfect life and embarks on a journey of love and healing, just long enough for the rug to be pulled out from under her again. Can she find the strength and will to pull herself together to save Ryan and herself when their lives are on the line? 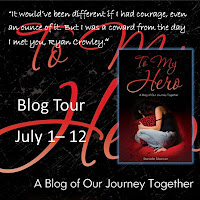 To my hero is a difficult and sad story but it is also a story about trust, friendship and love. Carly is broken after everything that happens to her, then her parents betray her and the only person there for her is Ryan. The boy she liked for years and the boy who was in love with her from 9th grade. They are people who missed a couple of chances because of misunderstandings so they decided on friendship. We see through trips in the past how it all went down. After that disasterous event, Ryan tries to help Carly to find herself again and to move on but Carly has problems trusting people, even him, after the rumors she heard about him (that werent true). This story made me cry on a few pages, but sometimes it made me smile. I am amazed how Sibarium always manages to potray such difficult stories with such ease. I cant wait for her next book.


Danielle Sibarium author of For Always and the Heart Waves Series grew up in Brooklyn, New York. Throughout her childhood, she transported herself into a fantasy world full of magic and wonder. Books were the gateway between her play world and reality. On any given summer afternoon she became Snow White sweeping and cooking for the dwarfs, or Cinderella waiting for the prince.

In 2004 Danielle won Honorable Mention in the Southern Heat contest. In 2007 she collaborated with Charlotte Doreen Small to write songs for her CD More. Danielle wrote the lyrics for Take My Hand, and Goodbye, while Charlotte contributed the melody.

Danielle graduated from Farleigh Dickinson University with honors, and currently lives in New Jersey with her husband and three children.

To My Hero Schedule