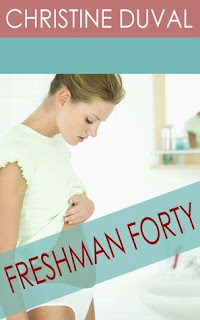 When eighteen-year-old Laurel Harris discovers she’s pregnant four weeks into the start of her freshman year at prestigious Colman College, she has all intentions of telling her father. But being away at school makes it too easy to hide. And while she can’t explain to her friends, or to herself even, the reasons why she doesn’t want the baby’s father to find out about the pregnancy, the rest of her world begins to unravel.

Freshman year is hard enough. Most girls get through by forming close friendships, finding new boys and a phone call from mom or dad on Sunday. Laurel has to navigate all of it while hiding an unplanned pregnancy from a summer fling...

An imperfect heroine plagued by bad choices and haunted by the memory of her deceased mother and grandparents, readers are sure to identify with Laurel as she navigates teen pregnancy, in secret, in a remote college setting.

Freshman Forty was originally self-published, but Christine just signed a deal to have it re-released by a publishing house this fall! Follow Christine on Twitter for updates @Christineduval1 or on her Goodreads author page.

I knew ever since I read the blurb that this book would be good and special. I read a few books about pregnancies but this story is on a new level. How would you deal if you ended up pregnant by a summer fling, your remaining family is a few countries away and you need to attend your classes? Laurel is a good girl, you can see it from the start but her bad choices sometimes relly annoyed me but those choices made this book captivating and real. I was really engossed in the story while reading, cheering for Laurel to finally make a good decision about htis pregnancy, like telling her father and the babys father. I was really happy at the end when Laurel and her father finally talk about their relationship and repair it. We meet a few people that leave a mark on Laurel while being pregnant like Mike, who ended up being a really good friend (I am really interested where that will go) or her best friend from New York. The book enden on a cliffanger and I hope for a sequel.

You can find the rest of the blog tour schedule here (http://www.xpressobooktours.com/2013/04/tour-sign-up-freshman-forty-by.html).

Christine Duval has been writing creatively since the fourth grade when she penned her first short story entitled "London Terror," about the murder of a cat in London. She grew up on the North Shore of Long Island and lived in Italy twice as a teenager: once when she was sixteen in Bologna and in a small town on the Adriatic Sea called Porto San Giorgio; then in Florence when she was nineteen. Her parents wondered if she'd ever come back.

College was spent in the Finger Lakes: the inspiration for Colman, Milton, and Kashong Lake in Freshman Forty. It really is cold, wet and grey there - OFTEN! But when the sun comes out, boy is it pretty.

Life eventually took her to New York's Upper West Side, the place she'll always consider home. Though for now she resides in New Jersey with her family and a very spoiled love bird who can't decide if he's a boy or she's a girl.