This side of salvation superfan contest DAY #5 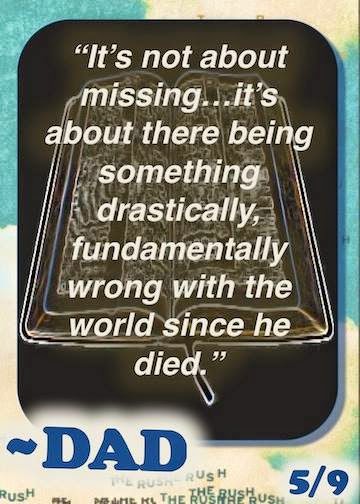 Each weekday between March 31 and April 10, Jeri Smith-Ready is posting a new This Side of Salvation “trading card” on her blog and on her various social networks. The cards feature quotes by the different characters, as well as iconic images associated with them. By sharing this image on your blog and/or social networks, you could win some great prizes!


Today’s card features David and Mara’s father. A recovering alcoholic, he replaced booze with religion after his older son, John, was killed in Afghanistan. When the economy went bad, he got laid off from the finance job that had provided his family with the secure, comfortable life he’d lacked as a child.

Unwilling to accept help from mere humans, John Senior retreated further from reality and began speaking in nothing but Bible quotes. He proved adept even at small talk (turns out there’s a lot of weather and food in the Bible, and holy wars make great sports metaphors), but his weird habit freaked out his children and alienated his friends.

For Superfan contest details, including rules, prize list, and entry form, see Saturday's post. If you already know what to do, here's a direct link to the entry form, which contains helpful instructions on how to link to your posts. To see a gallery of trading cards (and other interesting stuff from the book), visit the TSoS Pinterest page.


Also visit this entry of my blog and comment to win a signed set of Jeri Smith-Ready bookmarks including a This side of salvation bookmark.