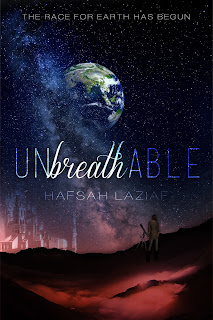 One hundred and fifty years ago, Earth was destroyed, and the remaining humans fled to the dusty red planet of Jutaire, where the only oxygen is manufactured, food is scarce, and death strikes often.

When Lissa’s father discovers Earth still exists, she accidentally inhales the toxic air of Jutaire, and in one breath, discovers she isn’t quite human.

Her father hangs for his discovery, and Lissa knows the Chancellors will come for her, for she saw the Earth that night too. With nothing to lose, she sets out to expose the truth. It isn’t long before she meets Julian, a beautiful boy who can breathe the toxic air like she can – and shows her that the Jute, the original inhabitants of the planet, are more tangled in their lives than she knows.

But the Chancellors are only pawns in a greater game – one where the Jute control everything. Worse, the Jute plan to leave Jutaire for Earth, but to get there, they need her. And they’ll stop at nothing until Lissa is in their clutches, even if they kill every human in the process.

The race for Earth has begun.