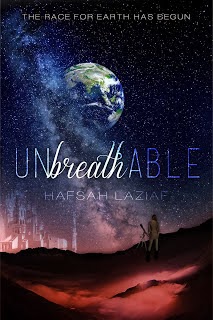 
One hundred and fifty years ago, Earth was destroyed, and the remaining humans fled to the dusty red planet of Jutaire, where the only oxygen is manufactured, food is scarce, and death strikes often.

When Lissa’s father discovers Earth still exists, she accidentally inhales the toxic air of Jutaire, and in one breath, discovers she isn’t quite human.

Her father hangs for his discovery, and Lissa knows the Chancellors will come for her, for she saw the Earth that night too. With nothing to lose, she sets out to expose the truth. It isn’t long before she meets Julian, a beautiful boy who can breathe the toxic air like she can – and shows her that the Jute, the original inhabitants of the planet, are more tangled in their lives than she knows.

But the Chancellors are only pawns in a greater game – one where the Jute control everything. Worse, the Jute plan to leave Jutaire for Earth, but to get there, they need her. And they’ll stop at nothing until Lissa is in their clutches, even if they kill every human in the process.

The race for Earth has begun.

Unbreathable was a great book with a various cast of interesting characters, plenty of action and amazing moments, beautifully written and with an aesome story. I fell in love first with the cover which is gorgeous, the when I started reading I just couldnt put it down, it was so well paced and interesting. I liked Lissa and how she matured and grew strong after the death of a man who raised her and how she always had hope. I loved Julian who is so brave and sweet and caring. I loved Slate, who finally get to see his daughter and you could just see the love pouring out of him. I liked Dena, who is heartbroken yet spunky. Rowan, wel, I liked him even though countless lives have been lost because of him but in the end he showed just how much love he is capable of holding. I hated the Queen, she was a b**** but she also had a different side which she I saw for a fleeting moment. I loved the world building, the humans on Jutaire, the beautiful Jute and a hope for Earth and a better existence. This is a story about love and forgiveness, sacrifice and hope. One of the best debuts and books of the year.