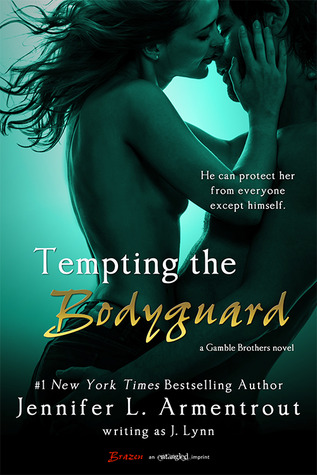 A sexy category romance from Entangled’s Brazen imprint...
He can protect her from everyone except himself.
Alana Gore is in danger. A take-no-prisoners publicist, her way with people has made her more than a few enemies over the years, but a creepy stalker is an entirely different matter. She needs a bodyguard, and the only man she can ask is not only ridiculously hot, but reputed to have taste for women that goes beyond adventurous.
Chandler Gamble has one rule: don't protect anyone you want to screw. But with Alana, he's caught between his job and his increasingly hard libido. On one hand, Alana needs his help. On the other, Chandler wants nothing more than to take the hot volcano of a woman in hand. To make her writhe in pleasure, until she's at his complete mercy.
She needs protection. He needs satisfaction. And the moment the line is crossed, all hell will break loose...

"You never have to give away a piece of you to me. But you can have as many pieces of me as you want."

Another series to say goodbye to, yet another set of characters I am going to miss. I have waited for this book to come out for a year and a half, ever since Tempting the player came out and we got an inkling whose story Tempting the bodyguard will be. I have to say, I was not dissappointed after the long wait. Alana and Chandler are my favorites from this series, they were really entertaining and I was rooting for them.
The story starts when Alana gets another threatening letter from a stalker but this one a  bit different since it states that he will se her tonight and that makes Alana really afraid and the only person she could think of in that situation was the hot bodyguard brother of her former publicist task. From there things heat up, they are both very attracted to each other, and it was only a matter of time before they ended up in bed. In this book it was the woman who ran from her feelings and the guy chased her, which wasw different compared to the first two books. The stalker storyline also heats up, when her car windows are smashed and her apartement trashed. I suspected who was the douche who was doing it and I was right. It was a violent ending  and also a really nice one. It was also really great to see Chase and Maddie who have happy news of their own, and Chad and Bridget, who are planning a wedding. There were some problems when Chandlers family found out that he liked Alana, since there was no love lost between her and Chad but Chandler deals with it like a pro.
In the end, I was satisfied with the ending of the series even though I will miss it and I am interested to see what will JLA write next in the adult romance genre.