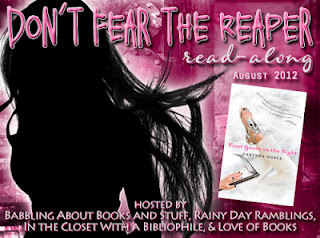 1. Shiny objects and old family stories are told in this chapter, including an old nickname for our dear Charley. What was the nickname her uncle Bob gave her when she was little? Do you have an old nickname from when you were a kid? You can share it, and if it's really embarrassing we won't mind. *wink*

Her nickname was Calamity as in Calamity Jane. I think she probably well deserved that one. I can just imagine her when she was little and the image is so funny.
My nickname was Lee. But when I first came to my new elementary school when I was 12, I was among the tallest people in school so they called me Mount Everrest XD.

2. In this chapter we met someone. A really special guy named Rocket. Now, my memory is not what it used to be, and I just can't remember what makes him so special. Can you tell me what makes this particular ghost unique among all the others? And how about you? What can you do that makes you special? Anything? Jump on one foot for a really long time counts.

Rocket knows when someone dies and he writes their names on a wall. He is a really unique character and I loe him. And I really dont know what makes me special. I read really fast and I can make pretty good cocktails :)

3. Charley is really *cough* not your ordinary girl. She does something that, well, there's no way around it. She named parts of her body and the names are... oh crap, I forgot. Just my luck. *sigh* But I'm sure you guys can say what part of her body she named and what the names were. And, since we are on the matter, have you ever named a part of your body? If so, what was it and what was the name? Come on, don't be shy.

She named her boobs XD They are Will Robinson and Danger . She also named her ovaries, Scotty and Beam me up. And then she named her toes but I really cant write them now, I am laughing so hard. I never did name any of my body parts.


4. We all have our little secrets. Things we don't tell anyone, not even our bff. Char (we became close :P ) is no different, but in this chapter she shared her little (big) secret (S) with her bff. What did you think about her reaction? What would be yours?

Cookie is really an awesome friend to Charley and one of the funniest characters ever. She reacted like a real friend should, with kindness and loyalty only a best friend can provide. I really hope I would react the same way.


5. In this chapter, Char continues her heart-to-heart with her BFF and comes up with some theories about our fave badboy/possibly ghost. What do you think of it? Can it be? What do you think about him? Hot? Double chocolate hot? Super duper caramel chocolate cake with a cherry on top hot?

Since I read this book so many times, I know how it all plays out but I must say that whenever he is in near, sparks fly. One of the hottest male characters ever *fans herself*