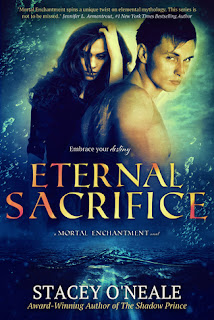 Valac has stolen two of the sacred objects. In a bid to rule all four courts, he has threatened to use Excalibur to cut the mist that protects Avalon--ultimately ending the lives of thousands of elementals. As the Akasha, Kalin has the power to stop him. And she refuses to lose anyone else she loves.

Will she have to sacrifice herself to save them?

Desperate to save Kalin's life, Rowan searches for the long-lost creator of the mist. But what he finds is the very last thing he expected. Everything he thought he knew about his past is turned upside down, and he questions whether he's meant to be the savior or the elemental that destroys them all.

Told from Kalin, Rowan, and Marcus's perspective, the final installment to the series follows their journey of courage, duty, sacrifice, and love.

Award-winning author, Stacey O'Neale, lives in Annapolis, Maryland. When she's not writing, she spends her time fangirling over books, blogging, watching fantasy television shows, cheering for the Baltimore Ravens, and hanging out with her husband and daughter.