Blog tour: Just a step away by Flora Roberts 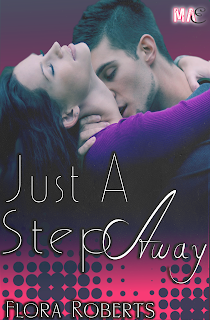 
Lanie Wagner has it all—from her great apartment in the heart of Los Angeles, to her amazing career as the city’s most sought after wedding planner. Yes, ladies and gents, Lanie is riding high on life.
But there's just one problem. When her cousin called her and asked Lanie to plan her wedding, she knew it was going to be a disaster. She hasn’t been back home in over five years, and her family is out of control crazy. All of them.
With her cousin's wedding looming, Lanie has to make a pivotal decision. She needs to find a date; a boyfriend to be exact. She needs to find some poor bastard willing to pretend to be madly in love with her for an entire week.
The only downside is Lanie is convinced that no one is pathetic enough to take her up on her offer.
Lucas Sparks, aka Sparky, is the epitome of every woman's wet dream. And he knows it. Born into a family of wealth and privilege, Lucas has never wanted for anything. Well, that was until he was given the opportunity to share an apartment with Lanie, the one woman that has never fallen at his feet and begged for all that he could give her.
The same woman that acts like he doesn't exist.
Even all the money in the world wouldn't be enough to make his humble roommate fall in love with him. When he is given the chance to spend a weekend away in the country with a woman he fantasizes about on a daily basis, he’s determined to do whatever is necessary to go along for the ride, even if it means pretending to be her man.
But playing pretend can be a dangerous game, and considering the circumstances, Lanie and Lucas just might have signed up for more than they bargained for.

Before my hand landed on the doorknob, I was pulled back by Lucas’ grip on my arm. The song had changed, and my breath hitched when he pulled me towards him, close to his bare chest. The song was deep and penetrating. I closed my eyes and let the beat of the music drill into every pore in my body. The singer’s voice was low and lust ridden, singing about being closer and how the woman he loved took his heart and his soul. That and the way Lucas held onto me sent a jolt of undeniable electricity zinging down my spine.

Lucas held me tighter to him and we moved slowly and deliberately around the narrow hallway. I could feel his breath on my neck as he dipped his head even further to rest it in the crook near my ear.

As the song continued, it felt as something shifted between us. I tried to shake the idea from my mind and just allow myself to feel and move. I felt Lucas’ hands slide down my back until they reached my hips. A visceral shudder racked through my body, and I wanted to feel more. More of this.

We moved, swaying from side to side, and for a moment I let myself forget about my problems and who I was actually with. I just let my body feel.

With that Lucas pulled me completely flush against his bare chest and I could feel his heart racing a mile a minute. It wasn’t as though I had never thought about him as more than a friend, my best friend, but I knew it would never work.

My hands had been resting on Lucas’ shoulders and when he pulled my hips into him, my fingers slithered around his neck until they reached the little hairs at the nape of his neck. He dragged in a ragged breath. A throaty growl bubbled up in his chest and I instantly felt a tightening deep in my belly.

I felt the warmth of his breath on my neck as he whispered, “Lanie”, moving impossibly closer to me. “I...”

I didn’t respond. I just kept moving to the beat of the music. I wanted to feel. I sucked in a breath when Lucas pressed himself against my belly. And that’s when I felt it. He was hard.

Something in the pit of my belly stirred, and when I opened my eyes and looked up at his face, Lucas’ brows were furrowed, almost as if he was scowling, parting his lips slightly. His eyes were wild, searching my face. I quickly pulled my hands away and bolted through my bedroom door, pressing my back up against the wood.

Why did everything seem even more fucked up?  All we did was dance. Why the hell would he get a woody just by dancing with me? It’s not like I’m one of those beautiful blonde, big boobed women he dates. Hell, those women don’t even have an ounce of fat on them! What the hell, Sparky? Maybe he needed to get laid. That had to be it. My vagina, his penis, so, so close. Oh, God!

I changed into my running gear. It was high time for that run.

Flora Roberts is an adult romance author with an affinity for writing about characters that are utterly insane and wonderfully sexy.
Living on a ranch with her three kids in sunny California, Flora thrives on the peace and quiet of her surroundings.
The first time the writing bug bit her in the butt was when she discovered the world of fanfiction. From then on pulling her away from her laptop was like pulling teeth out of an elephant.
Flora’s online stories have been read from around the world and have been reviewed as laugh-out-loud funny.
If she isn’t on her laptop writing about swoon worthy characters that make you spit your coffee out and laugh your ass off, you can more than likely find Flora spending time with her kids, reading books by her favorite authors, or sitting outside in the dark for no apparent reason.