Tour stop: Death and the girl next door excerpt + interview with Darynda + GIVEAWAY

I am really happy to be a part of this tour since I am a big fan of Darynda. I received the arc of the book on NetGalley and I read it as soon as it was approved and I loved it. It seems that everything Darynda Jones writes is compeling and sexy and funny. I have a little excerpt from DGND for you and a interview with Darynda so I hope you enjoy it :) The book is out October 2nd. 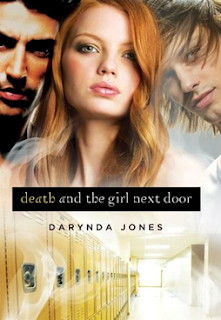 Ten years ago, Lorelei's parents disappeared without a trace. Raised by her grandparents and leaning on the support of her best friends, Lorelei is finally beginning to accept the fact that her parents are never coming home. For Lorelei, life goes on.
High school is not quite as painful as she thinks it will be, and things are as normal as they can be. Until the day the school's designated loner, Cameron Lusk, begins to stalk her, turning up where she least expects it, standing outside her house in the dark, night after night. Things get even more complicated when a new guy—terrifying, tough, sexy Jared Kovach—comes to school. Cameron and Jared instantly despise each other and Lorelei seems to be the reason for their animosity. What does Jared know about her parents? Why does Cameron tell Jared he can't have Lorelei? And what will any of them do when Death comes knocking for real? Thrilling, sassy, sexy, and inventive, Darynda Jones's first foray into the world of teens will leave readers eager for the next installment.

Now, here is the interview with the amazing Darynda Jones!

Hello Darynda,thank you so much for stopping by Between Fantasy and Reality
1.Could you please tell us in your own words about your new book Death and the Girl Next Door.
Oh, the pressure! Okay, here goes:
Death and the Girl Next Door is about sophomore Lorelei McAlister. Ten years ago,Lorelei's parents disappeared without a trace. Raised by her grandparents and leaning on the support of her best friends, Lorelei is finally beginning to accept the fact that her parents are never coming home. Life goes on and is as normal as can be until a new guy—terrifying, tough, sexy Jared Kovach—comes to school and he seems to have a specific interest in Lorelei, something that never happens. To complicate matters even further, the school's designated loner, Cameron Lusk, begins to stalk her, turning up where she least expects it, standing outside her house in the dark, night after night. Jared and Cameron instantly despise each other and Lorelei seems to be the reason for their animosity. What does Jared know about her parents? Why does Cameron tell Jared he can't have Lorelei? And what will any of them do when Death comes knocking for real?

2.What is your favorite scene in the book?

There is a fight scene between Jared and Cameron that I’m rather fond of. I really liked writing that scene. But right after that, there is a scene in the back of Cameron’s pickup where Jared starts to realize something is different, his world has changed. He is wounded, angry, and scared, and he thinks Lorelei has done something to him, to her utter bafflement. I really love that scene. It shows the lengths of Cameron’s animosity for Jared and the fact that both Cameron and Jared see Lorelei as something else, something
she is clueless about. It’s harsh and raw and leaves Lorelei reeling with knowledge of a world she never knew existed.

3. How did the idea for Death and The Girl Next Door come about? Was there a specific

inspiration?
I actually wrote that manuscript years ago, long before First Grave. I have written young adult forever and wanted to get back to it. I wanted to venture into the paranormal world and the story hit me one day. I just thought, how cool would it be if Death went to high school?

4. If you had to pick three words that best describe Death and The Girl Next Door, what
would they be?
Mysterious, action-packed, sexy.

5. Tell us a bit about Lorelei, is she as sassy as Charley?
She definitely has her sassy moments, but she’s not quite as sarcastic as Charley. Then again, she has two best friends, Brooklyn and Glitch, who help her out with that.

6. Have any of your characters been inspired/based on someone you know in real life?
I do actually use people I know in real life as physical inspiration quite often. It makes it easier to envision my characters. But for most of the characters in DATGND, I just used my imagination. Still, there is a set of twins, Ashlee and Sydnee, who are based on two of my nieces.

8.  How did you come up with the names for the books in the Darklight series?
My YA series went through several different titles. It was first called Riley’s Switch, which is the name of the fictional town the series is set in. Then it was called Grimsight, but my editor didn’t really like it. Death and the Girl Next Door was actually the brainchild of a friend of mine’s. I absolutely loved it, presented it to my editor, and she loved it too.

Thank you so much for stopping by Darynda, I hope you will be able to visit us again.
Thank you, Lea!
I am so happy we just sold to Algoritam for Croatian-language rights to FIRST GRAVE ON THE RIGHTS.  I am excited that I will be making new fans in Croatia.

And, here is the excerpt. :D


I laughed to myself and headed toward the back of our favorite and pretty much only hangout. It sat a mere block from our alma mater, Riley High, and we practically lived in our corner booth. I ducked past the snack counter and into a very dark back hall. Judging by the boxes lining the narrow passage, I’d be taking my life into my hands if I risked a journey to the little senorita’s room without illumination, so I ran my hand along a
paneled wall. Where would I be if I were a light switch? Just as the tips of my fingers found the switch, a silhouette stepped out of the shadows and brushed past me. I startled with a gasp.
“Excuse me,” I said, placing a hand over my heart.
“Sorry.” The guy paused slightly before continuing on his way, and in that instant, I saw the makings of utter perfection: a long arm with shadowy curves that dipped around the fluid lines of muscle; a tall, wide shoulder; dark hair that curled playfully over an ear and led to a strong, masculine jaw. Something inside me lurched, craving a closer look at his face, but he walked by too fast and the hall was too dark for me to catch anything else. After a couple of seconds, I realized my hand had brushed against his arm. It was enough to send a vision crashing into me, like the flash of a nuclear bomb, bright and unforgiving. Tamping down my surprise— I hadn’t had a vision in a very long time— I pressed shaking fingers to my forehead to wait out the familiar storm, to see what treasures would wash ashore in the aftermath. Yet the things I saw were unreal, impossible, and certainly not of this world: A desolate landscape lay before me with scorched clouds and a roiling, violet sky. The air was stagnant and so impossibly thick, breathing it took effort. Then I heard the clanging of metal. I turned to watch in horror as a being, a boy of no more than sixteen or seventeen, fierce and somehow not quite human, struggled with a dark, monstrous beast. The boy’s arms corded as tendon and muscle strained against the weight of the sword he wielded. He slashed again and again, but the monster was fast, with razorlike talons and sharp, gleaming teeth, and the boy knew what those teeth felt like when they sank into flesh, knew the blinding pain that accompanied defeat. But he also knew the power he himself wielded, the raw strength that saturated every molecule of his body. Another herculean effort landed a thrust in the monster’s shoulder and continued through its thick chest. The monster sank under the boy’s sword with a guttural scream. The boy looked on while the beast writhed in pain, watched it grow still as the life drained out of it, and somewhere in the back of the boy’s mind, he allowed himself to register the burning of his lungs as he struggled to fill them with air. Blood trickled between his fingers, down the length of his blade, and dripped to the powdery earth beneath his feet. I followed the trail of blood up to three huge gashes across his chest. Evidently three of the monster’s claws had met their mark, laying the flesh of its enemy open. I gasped and covered my mouth with both hands as the boy spun toward me, sword at the ready. Squinting against the low sun, I could almost make out his features, but the vision evaporated before I got the chance. A heartbeat later, I was back in the dark hallway, gasping for air, one palm pressed against my temple, the other against the wall for balance. I squeezed my eyes shut, fought the memory of the vision, the fear that summoned the taste of bile in the back of my throat,  the feel of blood dripping down the boy’s arm.

There is also a giveaway for my US readers. Good luck :) 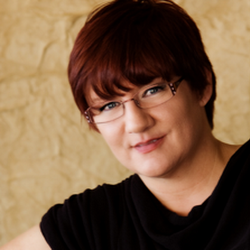 New York Times and USA Today Bestselling Author Darynda Jones has won numerous awards for her work including a prestigious Golden Heart®, a RITA®, and a Daphne du Maurier. As a born storyteller, she grew up spinning tales of dashing damsels and heroes in distress for any unfortunate soul who happened by, annoying man and beast alike. Darynda lives in the Land of Enchantment, also known as New Mexico, with her husband and two beautiful sons, the Mighty, Mighty Jones Boys.